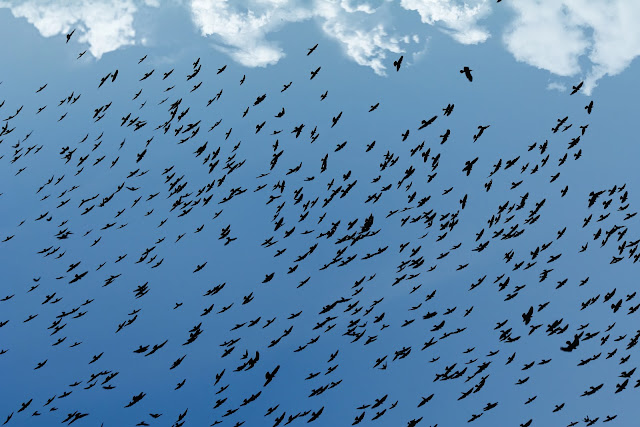 Sky is a Nest of Swallows
by Zainab
She was born in Iran and grew up with Iranian culture and language.  A flower needs soil to grow and for her, that soil was Iranian.  But her parents were Afghan immigrants—refugees--and life was very hard.  Privation, prejudice, strangeness: these were daily problems.


She never thought it easy or even possible to separate the flower from its soil—to say, “That soil is barbarian with you growing in it.  It doesn’t know you! It doesn’t like you!  Go! Go to another place…” So she could not believe Iran would persuade Afghan people to return to their country.  She felt herself an Iranian girl in language, style, and culture.  She could not face returning to a country she knew nothing of except that people said that she was from here.  She thought Iran was her home, her soil, but she was wrong.
The family finally left everything in Iran and came to Kabul. So many people had said goodbye to Afghanistan but they returned to say hello, to say:  “Hey, wake up! It is now time to recover, to refresh, to stand up for us who came back for you.”


During the first months, everything was new and life was good.  Her family pumped water from a well and looked at this as useful exercise.  Prices seemed cheaper because of the different currency, and they felt more affluent.  When there wasn’t enough fare for a bus or taxi they were happy to ride the rickshaw, though it was dangerous and the rickshaw ride on Kabul’s bumpy Charquila Road was like a theme park ride.


One month, two month, three…a whole year passed, and by then things had grown boring. It seemed they had regressed ten years or more.  It was no longer acceptable to waste energy and time extracting water from a well for washing clothes and dishes, instead of with piped water.  The noise from the neighborhood kids became intolerable when the girl wanted to study.  And in winter, she hated the snow, rain, and wind.  The girl who used to love the wind whiplashing her hair!


She had changed.  The mud and slosh, the dust and pollution in the street made getting around, having electricity, and getting water much harder.  Father’s struggle to break wood for fuel and his trembling in the cold also changed her.  Her tears when the wood was finished and there was no money to buy more—all of this changed her interests, ideas, even her appearance. She was now shy and her hands were black and wrinkled from the cold and dirty water of the well.  She looked much older than her age.  She endured her father’s unemployment too.  He had worked as a welder in Iran and he was covered with cuts and rashes that she sometimes had to soothe for him with pomades.  So although they had less money in Afghanistan, she was glad her father’s skin could heal.  But he was ashamed about not working.  He decided that an illegal return to Iran was the only solution.


She wanted the whole family to return to Iran but they didn’t have visas so it was impossible.  Only her dad went.  They had never been separated more than a week.  How could they tolerate this?  God, how?
His hands were saints for her.  She kissed them, these hands, which had taught her sacrifice and zeal.  He lifted her head, looked into her eyes, and said, “Your father is strong, but do you know what my real power is? It is the hope of seeing my daughter in white doctor’s cloth.  You will make me proud.  Remember this!
**


My father returned to Iran, that alien place.  He returned because Afghanistan was also alien, both for me and for him.  I will never forget how the Iranian people scoffed: Hey Afghan!  Hey stranger! And I will never forget how the Afghan people, my people, also scoffed: Hey Iranian! Hey stranger! Neither country could provide fertile soil for our whole family.


It has been years since we returned to Afghanistan and I am still looking for my nationality.  I’m still hoping for a piece of this earth where my family can sit down together.  But my father has not returned.  Sometimes I become sad and whisper, “God, I feel so poor not to have a home on any part of your earth!”  At once a voice responds: “Don’t be sad. You are more like a swallow than a flower.  Swallows have no lifelong nest on earth.  The sky is their nest.  Do not worry. Reach for the sky!”

I hope you leave comments below so the Afghan Women Writer's Project can relay them to the writers.


Stay tuned for some of the most amazing poetry you will ever read! To be posted on
One Million Girls, please Follow- www.milliongirls.blogspot.com